Up versus Down "Peg" Spectrum

Because of confusions arising from propaganda and contradictory
definitions, perhaps we should abandon the left-right spectrum and
instead have a VERTICAL "spectrum" of UP and DOWN -- Up to the maximum
of individual liberty consistent with law and order, or Down to the
maximum of political interventionism (and minimum of freedom). 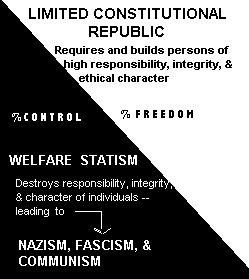